Here it is. Day 1 of the #30x30DirectWatercolor challenge. That’s my painting.

It’s … ok. I’m going to do my best to be positive here, but I also plan to be critical of my work in a (hopefully) upbuilding way. One of the things I like from Marc Taro Holmes posts during #30x30DirectWatercolor is he groups his thoughts into two categories: what worked or went well, and what didn’t. I’m going to do the same.

I promised I’d explain my theme when I posted my first painting. My theme is satellite imagery.

I’ve been fascinated with the kinds of images captured by satellites for awhile now. They always feel like paintings to me, the details of the earth abstracted into shapes and textures of color. What better subject for helping me to loosen up and focus more on painting the big, broad shapes instead of the details?

This was the reference I used: 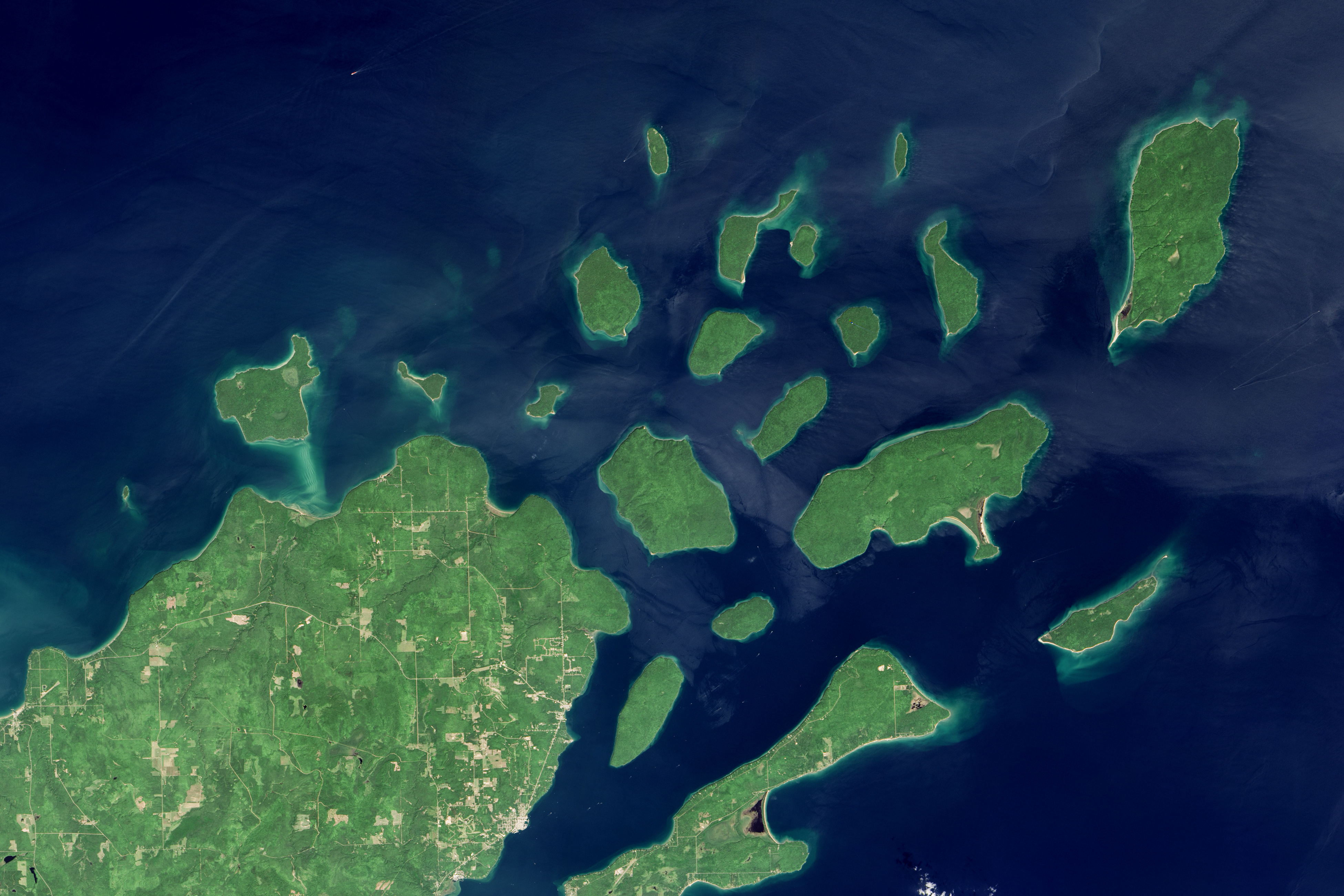 It’s from NASA’s catalog of public domain satellite images, which you can explore here.

I’ll be including my reference image along with my painting each day. Hopefully that will help you see what I was working from and maybe help explain the painting a bit better as well.

This is a departure from my style, not just because of the direct nature of it, but the resulting piece itself. I don’t often fill a page with color. The above image was cropped a bit, but only slightly. I painted practically to the edges here. I’m glad I painted something different than my norm.

I also think I did a nice job, especially in the first wash, of charging in with different pigments. The wash ends up much more interesting and dynamic, without the need for multiple passes and glazes like I’m used to.

The overall shape and composition also work for me. Despite no underdrawing, I feel like I still captured the subject as I’d intended. In fact, the island shapes themselves felt more dynamic because I was working with just a brush.

The whites. The whites just didn’t work. The only whites I preserved were around the islands, meant to convey the shallow waters and resulting sandbars. And while the effect itself did work, the stark white is just too much of a contrast to the rest of the piece. It doesn’t look right. It ends up, at least to my eye, as looking unfinished. If I had laid down a wash across the page, something light and yellow or tan, I think the whole effect would’ve worked a lot better.

The color of the sea also doesn’t work quite right for me. It’s a classic case of watercolor drying lighter. I should’ve leaned in more and darked up the sea. The deeper, darker value would’ve let the islands rise to prominance more…though it likely would’ve exacerbated my problem with the whites.

In the end I suppose I’m satisfied with the process here, if not the final result.